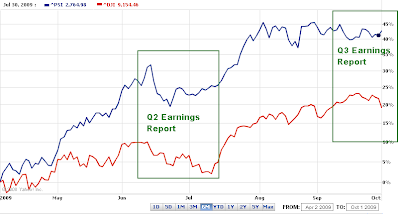 Ever since I invested/traded in stocks, my mindset was always to be a mid-term to long-term trader, holding stocks for at least a month or so, depending on its performance. If the value of my stocks fell, I usually gave it around 2-4 weeks to redeem itself before I sold.

However, during the Q2 period, my thinking changed, I held stocks for a maximum of 4 days, since I usually sold before the weekend, gain or loss. On fear that the rally will be short. Which also did not work for me (stock speculation) .

Here are the mistakes that cost me a lot of opportunity losses.

So given all these mistakes, the lessons I've learned is that I should not base my decisions for the short term. Also, most of the times, my analysis of a stock is amplified based on the charts.

For example, if I thought that MEG might have a negative EPS since most BPO are cutting jobs, my emotions gets amplified 10 times when the DJIA drops 100+ points.

Thus, I should think more logically when making decisions. (This applies on life too.)

Now, since the trend on the DJIA is showing that it might loss another 10% since the Q3 earnings reports is on its way, I think that DJIA would fall to about 9100 level and PSEI at 2700. But this is assuming Q3 will follow Q2's movements. Thus, I'm speculating that after the 9100 levels of DJIA, it will reach 10000 and PSEI at 3000 by Q4. Thus, I've decided to hold on to my stocks.

Further, coming from the BPO and IT sector, there is definitely a large surge in IT and BPO job demand for the past 3 months; thus, this is really a concrete evidence that the economy has really improved compared to the First Half levels.

I feel optimistic that 10K DJIA and 3K PSI is due on Q4. However, there's still one factor that I do not have any idea how it will affect the markets though, and that is TAXES.

Since, if you held a stock for more than a year, you will have to pay taxes for the capital gains you make that year; thus, people tend to sell stocks before the year's end (October-November) and start buying again by December - January. Thus, a sell off might happen at Q3-Q4.

On the other hand, most of the stocks held today is bought last March-July thus, a sell-off might come late, probably at Q1 next year.

Although, a sell-off for tax reasons is not an indicator of a worsening economy, it is however another buying opportunity that we might make huge profits from.