I just sold all my short term stocks today. Leaving only two of my long term picks.

I've read a lot of analyst views that mention that the PSEi is way too over valued at 2732.62. 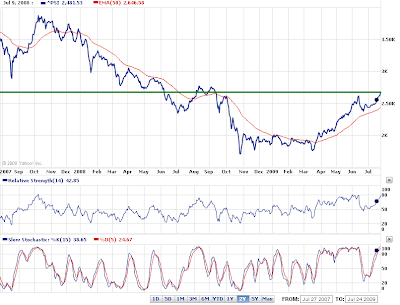 It may sound that the negative comments are just done by bitter bears who are trying to pull prices down so that they can re-enter. However, based from the chart above the current valuation of PSEi is already equal to it's value last May - August 2008, and this is even before the start of a lot of bankruptcy fillings in wall street.

Personally, in the IT sector, the demand for COBOL and RPG experts, which is widely needed in the banking sector to handle their mainframe application, just started to pick up this July 2009.

However, the people I know, who at last got a job after almost a year of trying to look for one, informed me that the salary they got was almost half what they were making the previous year. So yes, there are clear signs of recovery in the banking sector but it's not quite there yest. Thus, I still do not believe that 2732.62 is the right value for the PSEi right now.

My analysis is that the investment banks were the first one to get hit by the credit crisis, and they should be the first ones to bounce back. Thus, I'm keeping an eye on the demand for Mainframe programming Jobs.

Why SM and SMB? Well SMB is a no brainer for me, I don't even look at the charts, I just know that a lot of people enjoy a weekend night out with San Mig Light. Even during bad times, like when my team mates got laid off, we drank our problem's away with a case of San Mig Light. Also, my close-friend and I, who now works for JPMorgan after months of looking for job, celebrated the event with another case of San Mig Light. Good or Bad times SMB sales won't get affected. The difference is just that on good times we might drink in a nice bar/club, and during bad times we drink at home. Either way, SMB will get their profits. It's just the bar/club selling their beer for Php75/bottle will get hit. See the financial statement if you don't agree.

As for SMC, since SMC is trying diversify similar to AC (sold at 285) and SM (sold at 325), I would not be surprised if the value of their stock would be at level of AC and SM, in 3-5 years after they make profits from their recent acquisitions. Also, I like the move with LIB. People are commenting about SUN Cell not even making a profit after years of entering the market as the third player so SMC-LIB will encounter the same problem. Well, SUN Cell is making a profit, however it's just DGTL (Sold at 1.2) the landline division is pulling it back. Thus, there's still room for one more player.

So I'll be waiting for the next correction in August or September of 2009, then I'll go all in. Analyst are projecting PSEi at 2400-2100 level as their buy target.