I've mentioned on my previous post that I should have made more money when I should had bought and hold my stocks for a year or two.

Two Years in the Stock Market and What Did I Learn

After 5 months of not trading, the results is not too impressive, I made 10% gain mostly on SMDC due to the 1/3 stock rights. But, I should have had made that gain since October 2010 if I sold the stock when it skyrocketed to 10 per share.

But, no worries, I'm still optimistic with SMDC. Based from the charts below, SMDC never failed in it's usually behavior. It stagnates for the very longest time, and the moment you get impatient, it steeply pops up. Based from experience, this is due to the dividends either stock or cash.

Further, I think that SMDC is still a rookie compared to FLI, MEG, RLC and ALI, but given the track record of the companies under the SM umbrella, I really think this stock is safe and will go places. I just hope I won't get too impatient and get off this slow-but-steady ship. 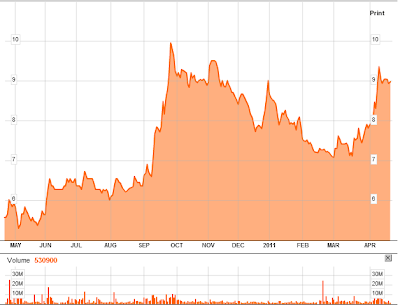 Now that SMDC is moving as I expected (sort-of), I'm now waiting for MPI to move. However, I am not too sure that it will in the near future. Since, based from what I know whenever MPI (MVP) makes an acquisition (DGTL) the stock price drops.

But, I really think that MPI is another must have stock on the portfolio right now, so I just buy when I can, and hope the Buy and Hold Strategy works.